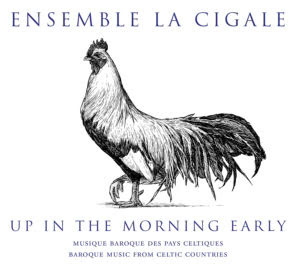 Up in the Morning Early—Baroque Music from Celtic Countries

Well before the Nationalist schools of the nineteenth century, Celtic music in general, and Scots tunes in particular, enjoyed a period of great popularity throughout Great Britain. Composers trained in the Italian art music of the time borrowed traditional Celtic melodies and used them to create musical hybrids which owed as much to the ornamental stylings of Corelli as to the fiddle and lute traditions of Scotland. Strangely, the actual Celtic composers, arrangers and publishers of the period, many of whom synthesized the traditional idioms of their native culture with real flair and affection, are often overlooked in explorations of what was dubbed the “Scots drawing room style” by the eighteenth-century music publisher James Johnson. The goal of this recording is to bring attention to these over-looked composers. The programme includes works by James Oswald, General John Reid, Edward Jones, William McGibbon, Turlough O’Carolan, and excerpts from the Rowallan and Straloch lute books.

Praise for Up in the Morning Early

… La Cigale has a hit on its hands with this collection of Baroque instrumental music from Celtic countries. The tight ensemble playing, sensitivity to style and musical moods, and clear production values, showcase a range of performances from the witty to the danceable to thoughtful to florid.

This is not one of those “let’s-see-how-these-folk-tunes-sound-on-our-quaint-early-music-instruments” recordings. The literature from Scotland, Ireland, and Wales is taken … from published sources in the 18th and early 19th centuries and expertly played by Montreal-based Ensemble La Cigale on appropriate instruments.

Listeners will want to send their own thank you to Ensemble La Cigale for producing such a warm and engaging recording.

Each [piece] is a delightful gem: melody-driven with a refined affect.

What stands out is the tightness of the ensemble, with all the musicians playing as one instrument…. Both musicianship and recording quality are professional, and the musicians show a commitment to authentic sound without sacrificing expressiveness. Recordings of these tunes are rare, and this album will be an essential part of any collection of early Celtic music.

It is wonderful to see a Canadian group of this calibre contributing to this vast but largely untapped repertory of Scotland, Ireland and Wales.

A well-developed programme, an instrumentation without harpsichord where the lute (or theorbo) and harp are used to maximum effect, an ensemble where we can feel a combination of hard work and complicity! Long live Scotland, Ireland … and Canada!

Superbly played by Ensemble La Cigale, these pieces are endearing and lively. The … instruments [are] as beautiful in their timbres as in their gracious execution.

Up in the Morning Early can be purchased here through PayPal, or in digital format at iTunes.

Up in the Morning Early
Audio CD, jacket, 16-page booklet.
$20 + GST/PST/HST as applicable + $5 shipping per order (5 discs maximum).
All prices in Canadian dollars. 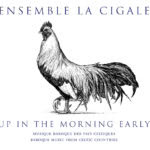 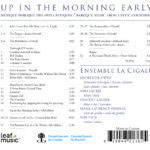