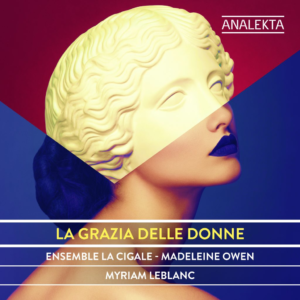 There is a difficulty in understanding what women have or have not done throughout history. Their stories are told in the blank spaces of history but do not make for tidy dates and landmarks, as they get on with life and persist in doing all manner of things. When we study Baroque Italy and take the time to look into these blank spaces, we discover a rich body of musical creation by women throughout the period. We know that Antonio Vivaldi taught music to girls, but we know little about his students, and only a few of their names are known today. The technical level of the music that he wrote while teaching at the Ospedale della Pietà in Venice shows that some of these girls were fine musicians; writings of the time confirm that the orchestra of Vivaldi’s most talented students attracted international acclaim. The fact that the Catholic church felt periodically compelled to issue edicts limiting or even banning music making and composition by women in convents suggests that, despite the church’s efforts, nuns continued to compose and perform. Some women, many of them from families of musicians, pursued careers as performers and composers at Italian courts. Though their works were published and shared, and they were well-respected in their time, these women were later overlooked in music history courses because they did not fit into the model of an evolutionary timeline of descent from one iconic composer to another.

La grazia delle donne is a celebration of femininity with a program of Italian music of the Baroque. The program features works by master women composers: Barbara Strozzi, Francesca and Settima Caccini, Vittoria Aleotti and Isabella Leonarda; as well as pieces by some of the men who encouraged feminine creativity: Giulio Caccini and Antonio Vivaldi.

… Ensemble La Cigale is up to the demands of these fine and sophisticated compositions. Delicacy, brio, impetus, dignity, sobriety, the whole program is built with a great balance of affects and expressions. All this with an impeccable coordination of the ensemble and an obvious concern for musicality. … An important and irresistible album.

This CD proves the presence of female singers and, above all, female composers in the Renaissance. It challenges preconceptions.

La grazia delle donne can be purchased here through PayPal, or in digital format at iTunes. 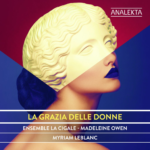 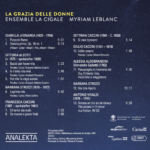