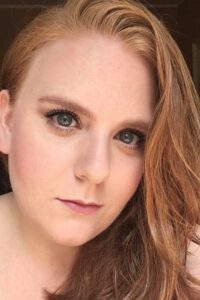 Canadian soprano Stephanie Manias is a rising star of the North American concert stage, known for her lush voice and captivating stage presence. Based in Montreal, she is heard regularly as a soloist and chorister with some of Canada’s most celebrated ensembles, such as the Studio de Musique Ancienne de Montréal (SMAM), la Chapelle de Québec, les Violons du Roy, the Church of St. Andrew and St. Paul (A&P), and l’Orchestre Symphonique de Montreal (OSM). Stephanie is at ease in many styles, eras, and genres of music, and particularly specializes in music of the Renaissance and Baroque periods. A prolific and versatile performer, she has been deemed at turns “angelic” and “fiery” (Montreal Gazette).

In addition to many live radio broadcasts on the BBC, CBC and Radio-Canada, Stephanie can be heard on recordings on the Atma, Analekta and Naxos labels. Originally from London, Ontario, Stephanie is a graduate of the Voice Performance program at the Schulich School of Music at McGill University, where she studied with Michael McMahon, Valerie Kinslow, and Canadian soprano Joanne Kolomyjec.