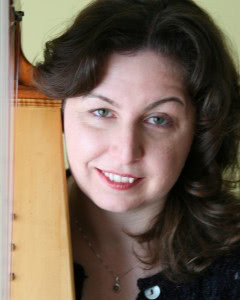 Sara Lackie is one of the few harpists in Canada to specialize in the Baroque triple harp, a lesser known historical instrument which has only been revived in recent years. Based in Montreal, she is in demand as a continuo specialist and accompanist both locally and beyond. Her recent projects include performances with Les Voix Humaines, Les Voix Baroques, Ensemble La Cigale, TENET (New York), Helios Opera (Boston), and the Studio de Musique Ancienne de Montréal; she has been heard nationally on CBC radio, and has recorded for both the ATMA and Analekta labels. In 2009, she made her solo debut with an acclaimed recital at the Sackville Early Music Festival.

After her initial training in piano, conducting, and modern harp, Sara pursued further studies in music history and historical performance practice at Carleton University and McGill University. She is also a veteran participant in numerous summer workshops, including the Amherst Early Music Festival, the Seattle Academy of Baroque Opera, the Corso Internazionale di Musica Antica (Urbino, Italy), and the International Baroque Institute at Longy. Sara gratefully acknowledges the inspirational guidance and support of her principal teacher, renowned harpist Maxine Eilander.

Sara is the graphic designer and webmaster for Ensemble La Cigale.