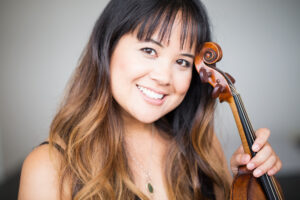 Originally from Chicago USA, violinist Sallynee Amawat began her musical studies at the age of 3. Her musical education includes professional and graduate studies at the Hong Kong Academy for Performing Arts, the University of Hartford (United States) and McGill University (Canada). For over 10 years, she has devoted her career to the practice of historical performance, completing her Masters and Doctorate degrees in Early Music at McGill University where her research focused on the repertoire of the early French violin school.

Sallynee has led baroque performance workshops and masterclasses in the United States and Bangkok, in partnership with Silapakorn University and the Princess Galayani Vatthana Institute of Music. Based in Montreal, she has performed throughout North America and Asia, and performs regularly with period ensembles such as the American Baroque Orchestra, the Arion Baroque Orchestra, Galileo Symphony Orchestra, Ensemble La Cigale, Les Boréades, the Studio de Musique Ancienne de Montréal (SMAM). She is a founding member and Executive Director of Infusion Baroque, Grand Prize and Audience Prize winners of the 2014 Early Music America Baroque Performance Competition. Infusion Baroque is known for “brilliant virtuosity, musical integrity and stage presence like no other.” (La Scena Musicale). Their debut album, 1747: CPE Bach, was described as “captivating and full of character” by Radio-Canada, and their latest album, Kreüsser, was nominated for the 2019 Prix Opus Album of the Year Award – Medieval, Renaissance and Baroque. Champions of historical and modern women in early music, the ensemble has organized an online series and promotional campaign for women musicians (#virtuELLES) during the pandemic, and will release their third album, Virtuosa, in 2022, based on composers and performers from the baroque and romantic eras.