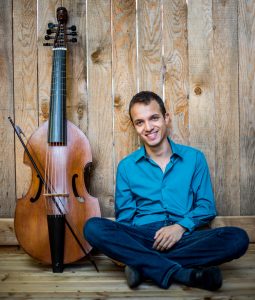 Born in Mexico City, Rafael Sánchez Guevara plays viola da gamba and cello, focusing on historical and rhetorical performance of several musical styles. He holds a Bachelor degree in Cello Performance from the National Autonomous University of Mexico (UNAM) and a Master degree in viola da gamba from the University of Montreal. His main teachers have been Ignacio Mariscal, Gabriela Villa Walls and Margaret Little.

Recipient of Mexican, American and European scholarships, he has participated in musical exchanges and programmes in Vancouver, Boston, France and Monaco, where he has taken lessons and masterclasses with Paolo Pandolfo, Sarah Cunningham, Bruno Cocset, Guido Balestracci, Laurence Dreyfus and Wieland Kuijken.

Since 2010 he is part of La Fontegara, one of Mexico leading Early Music ensembles, playing concerts all around Mexico, as well as in Latin America, Spain, the United States and Canada. Recordings of the ensamble include “Godfather”, with music by Telemann and CPE Bach (Meridian Records, UK, 2011), and “Arca de Música”, a double CD with instrumental music from Mexican 18th-century archives (Meridian Records, UK, 2017). He is equally at home playing cello and gamba and he joins a variety of chamber music ensembles. He is a member of Camerata Melancolía, a viol consort active in Mexico since 2014, and in 2017 he joined Canadian viol consort Les Voix Humaines for a tour and the CD “Lachrimæ” (ATMA Classique, Canada, 2018).

Based in Mexico City again, he is glad to teach viola da gamba at UNAM, as well as organize and play concerts involving local and international musicians, and promote cultural interchange.