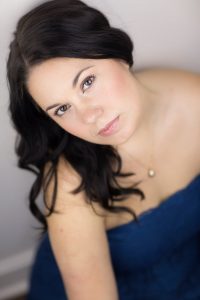 A graduate of McGill University, Myriam Leblanc obtained a master’s degree in choral conducting direction from the University of Sherbrooke. She was a First Prize winner and People’s choice Award winner at the Orchestre symphonique de Trois-Rivières Competition, a Jeune Ambassadrice Lyrique in 2014 (Prix Québec-Bavière), Audience Choice Award winner at the Canadian Opera Company Centre Stage Competition, Third Prize winner at the Ottawa Choral Society New Discoveries contest, holder of the Excellence grant given annually by l’Atelier lyrique de l’Opéra de Montréal, First Prize winner in the Mathieu-Duguay Early Music Competition at the 2017 Lamèque International Baroque Music Festival. She has been working in the world of music for few years. Leblanc is recognized for the purity of her tone, a flexible and warm voice and her mastery of both technique and musical expressiveness.
​
In 2016, she made her debut with the Opéra de Montréal in the role of the High Priestess in Verdi’s Aida. La Presse music critic Caroline Rodgers described her voice as one of “rare beauty”. Her more recent performances (2017-2018) include Milica in Sokolovic’s Svadba with Opéra de Montréal, Micaela in Bizet’s Carmen with Opéra de Québec and concerts with conductors such as Yannick Nézet-Séguin, Kent Nagano, Matthias Maute and Louis Lavigueur. In 2018-2019, she sang a Gilda in Verdi’s Rigoletto, the soprano solos on Handel’s Messiah with Ensemble Caprice and the Mendelssohn’s Symphony No.2 “Lobgesang” with l’Orchestre Metropolitain under Yannick Nézet-Séguin’s direction.