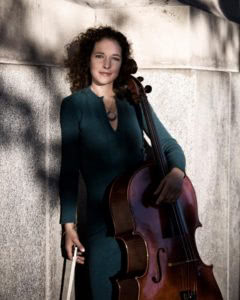 Marie-Michel Beauparlant holds a diploma from the Conservatoire de musique de Montréal (2005), a Master’s degree in performance from Rice University (2008) and a Doctorate of Musical Arts in performance from Stony Brook University (2014). She has studied with Denis Brott, Norman Fischer and Colin Carr. She is a past winner of the Radio Canada young artists program (2006) and been invited to the prestigious Tanglewood Music Center (2006–2008) where she completed her training with the Boston Symphony Orchestra under the direction of James Levine.

Passionate about contemporary music, Marie-Michel has participated in numerous North American premieres and has performed at the Tanglewood Contemporary Music Festival. During her time at Stony Brook, she became a member of the Contemporary Chamber Players of the University and participated in the World Premieres Concerts in New York (2011), concerts devoted to Ligeti, Stockhausen and Crumb, as well as a professional recording of music by Lansing Mcloskey.

Since the end of her formal studies, Marie-Michel has pursued a growing interest in the art of improvisation and early music performance. She has taken part in various programs offered by the Canadian Baroque ensemble Tafelmusik and studies Baroque cello with Christina Mahler and Elinor Frey.

Marie-Michel has won numerous prizes and scholarships including the Concerto Competition and the “Prix” in cello and chamber music from the Montreal Conservatory of Music, the Samuel Mayes Memorial Cello Award from the Tanglewood Music Center and the Jeanne Lamon Scholarship from Tafelmusik. She also received full scholarships for her studies at Rice and Stony Brook Universities. She has participated in numerous Master Classes with musicians and renowned professors including Yo-Yo Ma. She performs regularly with various Canadian ensembles including the Quebec Symphony Orchestra and the Violons du Roy.

A dedicated teacher, Marie-Michel has taught for fifteen years in various institutions including Rice University, Amhesrt College, The Bement School in Massachusetts and currently the Cooperative of Music Teachers of Montreal, the Regina Assumpta College and the school Des Cèdres of Laval.