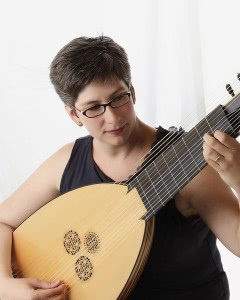 Described by critics as “a breath of fresh air” (Le Droit) and praised for her “excellent theorbo continuo playing” (The Ottawa Citizen), Madeleine Owen began playing the guitar at the age of seven. After university studies in classical guitar, she has gone on to specialize in early music, performing on renaissance lute, theorbo, and baroque guitar. Her instinctive musicality on these instruments makes her a favorite with audiences.

Madeleine Owen performs regularly as a soloist, chamber musician and accompanist. She can be heard in concert series such as Orgue et couleurs, the Lamèque, Montréal and Boston early music festivals, and with groups such as Le Nef, Ensemble Appassionata, the Toronto Masques Theatre and the Central City Opera (Colorado).

In spring of 2003, her duo Celia’s Fansye participated in the modern day premiere of the Montréal lute manuscript at the Festival du luth de la Nouvelle-France. Madeleine Owen has been featured on local and national television and radio as well as on National Public Radio in the United States and she has been recorded on the Productions XXI label. In the fall of 2006, as a member of the broken consort The Queen’s Trouble, she competed as a finalist in Early Music America’s Medieval and Renaissance Competition in New York.

Madeleine Owen has studied lute with well-known musicians such as Sylvain Bergeron and Nigel North and attended the Oberlin Baroque Performance Institute and Lute Society of America workshops. She is a graduate in lute performance from Mcgill University’s early music programme.