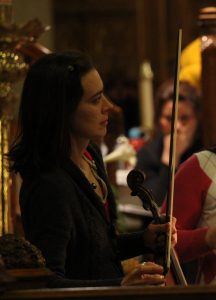 Lucie Ringuette, violin, studied at the Conservatoire de musique de Montréal with Johanne Arel and Raymond Dessaints. Since 1990, she has performed as a soloist, instrumentalist, concertmaster and chamber music artist throughout Quebec. She has played on more than fifteen recordings, including winners of the Prix Opus and Juno Awards. Notably, she has played with the Amati Ensemble, the Montreal Baroque Orchestra, Arion Baroque Orchestra, the Studio de musique ancienne de Montréal, the Bernard Primeau Montreal Jazz Ensemble, and Ensemble Caprice. Her many concert tours have taken her throughout Canada as well as to France, Poland, Turkey, the United States, Ecuador and Mexico.

In addition to her music career, Lucie Ringuette works as a coordinator for educational development at the Université de Montréal and holds a master’s degree in geology from the University of Leicester in England.