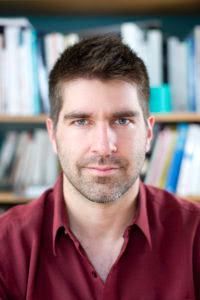 Frédéric Chiasson was born in 1978, in Lamèque, a small town of New Brunswick (Canada). After studying saxophone and obtaining Premiers Prix of the Conservatoire de Boulogne-Billancourt and École nationale de musique de Guéret (France), he returns to Canada and studies composition. He obtains in Université de Montréal a master degree in composition with Denis Gougeon, and a doctor degree with Isabelle Panneton and Caroline Traube.

Frédéric Chiasson distinguishes himself from other composers of his generation with his search for an alchemy between contemporary and more ancient composition techniques, producing a renewed musical expression. Resulting pieces leave an impression of strength, originality and naturalness. His works are highly appreciated from performers and listeners, whether they are instrumental (The Blade of Horizon), vocal (Scènes, Urbania, Nelligan’s Poems), orchestral (Cristal, Intercosmos, The Eye) or operatic (Bungalopolis).

Being also a music researcher, he has given many lectures – during presentations at the International Conference on Music Perception and Cognition (ICMPC), the Observatoire interdisciplinaire de création et de recherche en musique (OICRM) and the Society for Music Perception and Cognition (SMPC), among others – on his research on instrumental and orchestral timbre related to Charles Koechlin’s Traité de l’orchestration. He has also written and co-written articles on this topic in Koechlin, compositeur et humaniste and Théorie et composition musicales au XXe siècle.

Chiasson has been a participant to the New Music workshop at Domaine Forget, directed by Denis Bouliane and Lorraine Vaillancourt. He was president of the Cercle des compositeurs de l’Université de Montréal (CéCo), being in its board for four years. He also has been Student Coordinator of the Expanded Musical Practice Research Axis of the Centre for Interdisciplinary Research on Music and Media Technology (CIRMMT) and secretary of the board of directors of Codes d’accès.

Chiasson obtained many grants and prices, among them the Fonds québécois de la recherche sur la société et la culture (FQRSC) doctorate scholarship, the CIRMMT Student Award and the Canadian Universities Musical Society Composition Price (for Cristal) and the Orchestre de l’Université de Montréal Composition Price. La Lame de l’horizon has also been awarded in the Saxotronics competition, organised by Medea Electronique (Greece). Chiasson has been chosen as the composer in residence of the Orchestre à vents non identifié (OVNI) for the year 2016-2017.